CA Fights Back as MJ Divisive as God, Gays & Guns & Trump Ramps Up War on Drugs 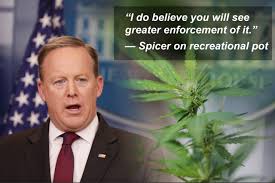 Will the Trump administration go after recreational marijuana but not medical marijuana? That possibility seems possible after President Trump’s press secretary, Sean Spicer, stated in a press conference that President Trump sees “a big difference” between the use of marijuana for medical purposes and for recreational purposes. Equating the dangers of marijuana to opioids, he concluded by stating that this “is something the Department of Justice, I think, will be further looking into.”

Whether the Trump administration will look favorably on medical marijuana by allowing states to go their own way with the legalization of medical marijuana or have cannabis moved to Schedule 2 on the Controlled Substances Act chart which would allow doctors to prescribe marijuana and pharmaceutical companies to produce and distribute it to pharmacies remains to be seen, but this contentious issue is becoming even more polarizing then god, gays and guns.

Drug testing has always been about testing for marijuana. An unemployment applicant knowing that he or she will be drug screened can refrain from using meth or crack or heroin for a couple days and pass as these drugs are out of the body after two to three days. Not so for marijuana users as marijuana can remain in the body for up to a month or more.

The vote on reversing the drug testing ban is not the first time that a vote on a marijuana/drug law reform issue has been so lopsided with Republicans opposing reform and Democrats supporting reform. It most certainly will not be the last.

With the expected upcoming vote in April on whether to renew the Rohrabacher/Farr amendment preventing the Dept. of Justice from spending money to enforce federal marijuana prohibition law in states that have state regulated medical marijuana distribution systems, this vote to repeal the ban on drug testing may be a harbinger that the small number of Republicans that voted with the overwhelming number of Democrats in support of the DOJ defunding amendment, may now vote in opposition.

The failure of the Rohrabacher/Farr amendment would free U.S. Attorney General Jeff Sessions to undertake a massive federal pogrom against states which have enacted medical and adult-use marijuana initiatives and legislation.

And don’t think for one minute that Trump is not cognizant that police will be pushing legislators to do that – its putting the money that marijuana legalization took out of their pockets back in.

To bolster my concern that Trump will not let states go their own way with marijuana, but rather take a harsher and more regressive position is his oft-repeated “law and order” campaign statements and apparent decision to double-down on the War on Drugs. At a recent address he made to the law enforcement professionals of the Major Cities Chiefs Association, he stated "We're going to stop the drugs from pouring in . . . We're going to stop those drugs from poisoning our youth, from poisoning our people. We're going to be ruthless in that fight.”

Trump went on to castigate the Obama administration for releasing "record numbers of drug traffickers, many of them kingpins." Far from being drug kingpins, most of the 1,700 drug war prisoners whose sentences were commuted by President Obama had already served sentences longer than they would have under current, revised sentencing guidelines.

To back up his rhetoric of being “ruthless” to the Chiefs Association, at the Oval Office swearing in of Attorney General Jeff Session, Trump issued three executive orders he said were "designed to restore safety in America," but really signal an escalation of the War on Drugs with increased funding for police and law enforcement agencies across the country.

What we cannot do is sit on our butts and smoke pot and wait to see what the Trump administration is going to do whether it concerns medical or adult-use marijuana. At the last meeting of MAPP in Moreno Valley, Cat Packer, California Policy Coordinator for the Drug Policy Alliance (DPA), alerted us to a bill that was going to be introduced in the legislature that would direct law enforcement and government agencies at both the local and state level to refuse to cooperate with federal agencies in the enforcement of federal marijuana prohibition laws.

Cat knew of what she spoke as AB 1578 was submitted last week to the state assembly. Authored by Assemblyman Jones-Sawyer (D-LA) and co-authored by three other state assembly members and two state senators, the bill would “prohibit a state or local agency from taking certain actions without a court order signed by a judge, including using agency money, facilities, property, equipment, or personnel to assist a federal agency to investigate, detain, detect, report, or arrest a person for commercial or noncommercial marijuana or medical cannabis activity that is authorized by law in the State of California and transferring an individual to federal law enforcement authorities for purposes of marijuana enforcement.” 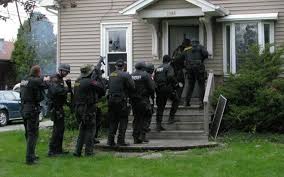 Federal police agencies, especially narcotic agencies like the Drug Enforcement Administration (DEA), almost always rely heavily on local law enforcement to provide the bulk of the enforcement personnel used in their raids. Usually there are two to four DEA agents accompanied by a phalanx of a dozen or more local police when making a bust.

If local police are not allowed to assist them, the ability of the DEA to make arrests will be significantly impacted as even Sessions noted in his confirmation hearings that enforcement of federal marijuana prohibition law “is a problem of resources for the federal government.”

Of course we don’t know for sure what the Trump Administration is planning, but as I wrote in a previous email “we should hope for the best, but prepare for the worst.” At all three MAPP meetings in March we will be doing just that with discussions of AB 1578 and how we as patients and consumers of marijuana can take actions to insure the continuation of using medical and adult-use of marijuana free of federal interference.

At the meeting there will be an analysis of AB 1578 and discussion of what its provisions portend. This will not just be armchair posturing, but we will also be providing information on actions that can be taken individually and as a group. You are not powerless, but information and education is key to developing the power within you.

At the Moreno Valley/Western IE MAPP meeting, we will also have a presentation by long-time advocate Michael Harris who has become the lead plaintiff in DPA’s lawsuit against the defacto bans cities and counties have enacted to undercut the indoor cultivation of marijuana permitted by Prop. 64. This lawsuit is going to be critical in establishing the rights of people to grow indoors with regulations that are reasonable and not so onerous as to make it all but impossible for most people to grow their own.

Like the lawsuit where the city of Riverside sued the Inland Empire Patients Health & Wellness Center for violating its zoning ordinances by distributing marijuana to its members, this lawsuit on defacto bans will be precedent setting as it most assuredly will eventually be decided by the California Supreme Court. Let’s hope that outcome is favorable to us this time.

Keep smoking, vaporizing and/or eating marijuana, but get off that couch and attend one of the MAPP meetings near you. What happens over the next six months will affect your access to marijuana for years to come.

Mark your calendar to attend any of these MAPP meetings.

There is so much to do to protect
our rights to access marijuana and
we could use a little help from our friends.
Please join our 420 Club and
Donate $4.20/month
CLICK HERE TO JOIN