US Attorney General designate Jeff Sessions underwent his confirmation hearing on January 10 and his testimony on marijuana was anything but reassuring. Although some commentators have written that his statements were wishy-washy and non-committal, I believe his responses portend a major crackdown in states that have legalized marijuana whether for medical or recreational adult-use.

After hours of questioning on a variety of issues, Senator Patrick Leahy (D-Vt) was able to ask Senator Sessions about how he would view marijuana policy as AG:

Senator Leahy: “Would you use our federal resources to investigate and prosecute sick people using marijuana in accordance with state law even though it might violate federal law?”

Senator Sessions: “I won’t commit to never enforcing federal law, Senator Leahy, but absolutely it is a problem of resources for the federal government. The Department of Justice under Lynch and Holder set forth some policies that they thought were appropriate to define what cases should be prosecuted in states that have legalized, at least in some fashion marijuana, some parts of marijuana.”

Senator Leahy: “Do you agree with those guidelines?”

Senator Sessions: “I think some of them are truly valuable in evaluating cases, but the fundamentally the criticism I think that is legitimate is that they may not have been followed. Using good judgement on how to handle these cases will be a responsibility of mine I know it won’t be an easy decision but I will try to do my duty in a fair and just way

Senator Leahy: “The reason I mention this, is because you have some very strong views, you even mandated the death penalty for second offense on drug trafficking, including marijuana, even though mandatory death penalties are of course unconstitutional.

Senator Sessions: “Well I’m not sure under what circumstances I said that, but I don’t think…”

Senator Leahy: “Would you say it’s not your view today?”

Senator Sessions: “(laughs) It is not my view today.”

After that exchange, Senator Mike Lee (R-UT) followed up with questions regarding how marijuana policy factors into federalism and asked if the way the Obama Administration has handled marijuana laws created any issues with separation of powers and states’ rights. Sessions replied that:

“One obvious concern is the United States Congress has made the possession in every state and distribution an illegal act. If that’s something that is not desired any longer Congress should pass a law to change the rule, it is not the Attorney General’s job to decide what laws to enforce.”

Although Sessions didn’t say he would be coming after states that legalized marijuana in opposition to federal law, he certainly didn’t say he wouldn’t and his statement that "it is a problem of resources" and that “it is not the Attorney General’s job to decide what laws to enforce” leaves the door wide open for beginning a new federal crackdown on states whose citizens have decided that it’s time for a change in marijuana policy.

Unlike reproductive rights, immigration policy and climate change, marijuana policy has never been at the forefront of the concerns of Trump’s base. I would imagine that the Trump Administration is well aware that the majority of Americans, and that includes Trump’s base, feel marijuana should be legalized or at the very least left up to the states on whether to legalize. However one of Trump’s biggest supporters to whom he feels a special allegiance is cops and they would like nothing better than to see his Administration declare war on marijuana legalization and go all-out to bury it.

Although Sessions is a big proponent of states’ rights, it usually doesn’t apply to issues that he opposes like same-sex marriage. Even if marijuana was one of Session’s major out-of-the-gate concerns, there is little he can do because of the Rohrabacher/Farr amendment which prevents the DOJ from enforcing federal law in states with state-wide regulation systems for the distribution of marijuana.

The Rohrabacher/Farr amendment expires on April 28, 2017. The Amendment passed because it was supported by over 90% of the Democrats in Congress and by around 25% of the Republicans. If Trump and Sessions put the pressure on those Republicans to oppose it, then the Amendment could very well go down in defeat. If Congress does not renew it, then Sessions will be free to do whatever he wants. Based on what Sessions said and didn’t say at his confirmation hearings, it would be foolish in the extreme to wager on Sessions’ continuing the Obama Administration's policy of non-interference.

Of concern is what actions we can expect from the feds and what our range of responses can be. Although the ambiance is dark, there is more than one light beaming in from the end of the tunnel and those will be forthrightly discussed, presented and analyzed in the next newsletter.

In the meantime, I don’t mean to imply that nothing is being done on our side – important and vital work is being done but too few people are involved in it. Unless you subscribe to a marijuana newsletter like mine, you are unlikely to hear about it as the mainstream media specializes in ignoring any constructive programs we undertake.

In the Inland Empire, you will have the opportunity to learn what is being done to implement and defend Prop. 64 at the Wednesday, February 1 meeting of the Marijuana Anti-Prohibition Project. Cat Packer, California Policy Coordinator for the Drug Policy Alliance, is working to ensure the successful and equitable implementation of Prop. 64.

Cat will discuss implementation strategy on both the local and state level, focus on the current trend by cities and counties to pass defacto bans to undercut the sections of Prop. 64 that prevent local governments from banning indoor cultivation and how to defend against Sessions and the feds attempts to undo medical marijuana and recreational marijuana legislation enacted at the state level.

In addition to Ms. Packer’s presentation there will be more growing tips from Cannabis Cultivation Guru Ronie Downey. There will also be fabulous door prizes including two ¼ ounce packets of super-quality cannabis donated by the All The Way Up Collective located next door to where we meet at Greenview Medical.

There will be more information on this critically important meeting in the next newsletter, but circle the date on your calendar now so you won’t miss it. There are dark clouds in the sky for sure, but at the meeting we can celebrate the joys of cannabis as we work together towards our goal of safe, reliable, local and affordable access.

For those of you who would like to join us for dinner, we will be meeting at the Happy Buffet at 6 p.m. For an extraordinarily reasonable $7.99, you can enjoy sushi, a salad bar, a superb assortment of everyone’s favorite Chinese entrees and a Mongolian BBQ grill. It is a fun, pleasant and satisfying way to gather with old friends and new for an enjoyable meal before the meeting. The Happy Buffet is 1 ½ miles east of Greenview Medical at 23750 Alessandro Blvd., Moreno Valley 92553.

At least for California

PAUL CHABOT IS MOVING TO TEXAS

Unfortunately it won't happen until Thanksgiving

Paul Chabot, drug war proponent and twice-failed IE Congressional candidate, has announced that at Thanksgiving he and his family will “move to ‘America,’ to find a region of our nation that embraces the values and morals we cherish.”

Lamenting that liberals “have degraded the State of Reagan to but a shell of its former self” and that California has been “overrun by illegals, drug addicts and violent criminals under the umbrella of a radical liberal ideology that has destroyed the state,” Chabot announced that he will be moving to McKinney, a small city of north of Dallas, where he “fell in love with the city, its people and the values that guide Texas.”

One of the values that guide Texas that he was referring to no doubt were penalties of 180 days in jail and a fine of up to $2,000 for possessing two ounces of marijuana and up to two years in prison for possession of any amount of a cannabis concentrate.

Chabot came to the attention of the IE marijuana community after he had me falsely arrested for battery as a ploy to keep me from attending a meeting in which he was making a presentation. After a three day trial, costing taxpayers in excess of $35,000, I was found not guilty. I then filed false arrest charges against Chabot for which he was convicted.

His bid for Congressional office was as unsuccessful as his multi-tiered anti-drug organizations which fed at the tit of federal government drug prohibition money. The prohibitionist policies espoused by Chabot and his fellow reefer madness co-conspirators have destroyed the lives of thousands of Californians. To read the story in the PE, CLICK HERE. 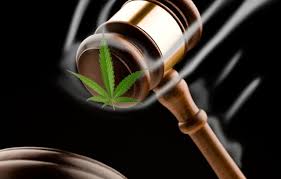 
A U.S. District Court in Denver Colorado has ruled in favor of the IRS upholding Sec. 280E which denies marijuana businesses the ability to deduct ordinary and usual business expenses on their federal income taxes.  This decision will most likely be appealed to a federal court of appeals eventually working its way up to the U.S. Supreme Court.

I would advise against holding's one brief in anticipation of a favorable ruling although that always remains a possibility. If Section 280E is ever to be repealed, it will mostly be through legislative and not judicial action. In my last email newsletter, I wrote about the California Democratic Party passing a resolution in opposition to this IRS practice. This is a start, but only a start.

To read the court's nitty-gritty synopsis of the ruling CLICK HERE.

The Institute for Health Policy and Leadership at Loma Linda University Health Center will be presenting a one hour seminar entitled “Legislative Update on Marijuana in California (and the U.S.)” at their “Spotlight on Health Policy” program on Wednesday, Jan. 25 from 12 noon to 1 p.m.

Dr. Ettie Rosenberg, a licensed member of the California Bar and the California State Board of Pharmacy, will provide a presentation on policy and practice implications of California’s recently passed Prop. 64. The meeting is free and open to the public and will be held in the A-level amphitheater at the Loma Linda University Health Center, 11234 Anderson St, Loma Linda, CA 92354.

The Extraordinary Story of Tom Place