Increasing & Decreasing Police Power Over You 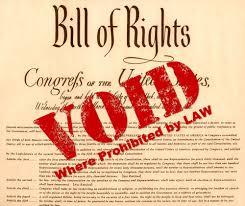 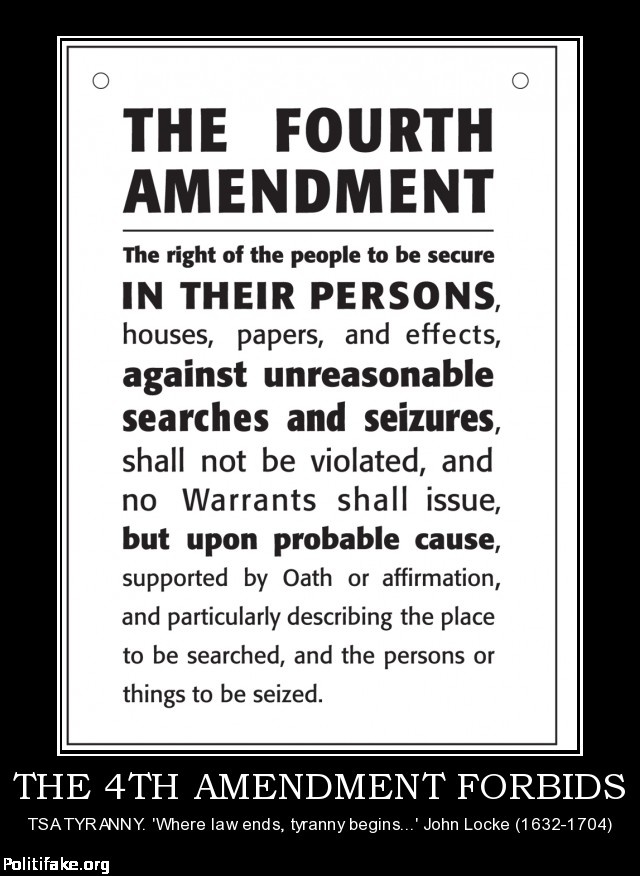 The War on Drugs has really been a War on Constitutional Rights as it has significantly expanded the power of police by ominously undermining your fourth amendment rights.

“The right of the people to be secure in their persons, houses, papers, and effects, against unreasonable searches and seizures, shall not be violated, and no warrants shall issue, but upon probable cause, supported by oath or affirmation, and particularly describing the place to be searched, and the persons or things to be seized.”

Let’s start off with asset forfeiture as that is something you can actually do something about right now. 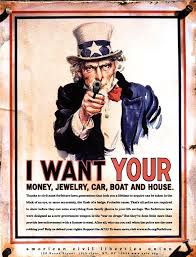 Asset forfeiture has got to be one of most flagrant violations of your 4th Amendment rights as it allows police to seize and keep assets that they only suspect have been involved in criminal activity. Although you are entitled to protections under criminal law, your property is not.

Whereas you need to be found guilty beyond a reasonable doubt to be convicted of a crime, your property needs only to be suspected of a crime to be permanently forfeited to police. As a consequence police can take and keep your money, car, home or other personal items without even charging you with a crime.

This activity is called Policing for Profit and totally distorts police law enforcement priorities as they are financially rewarded for catching a drug dealer but not for catching a murderer, rapist or burglar.

Although California has passed legislation reforming asset forfeiture law, local law enforcement has gotten around those reforms by joining with federal law enforcement officials in a system called “equitable sharing” in which local police get up to 80% of the value of seized property. Evidentiary laws are far less rigorous at the federal level and thus are seen by local police as a very profitable way to circumvent California’s more stringent state laws. 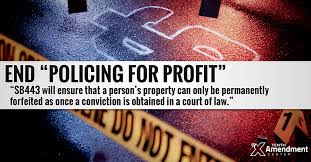 SB 443 will bring an end to Policing for Profit in California. The bill has passed the Senate and now awaits a vote on the floor of the Assembly which is expected this week. You can help this bill get passed into law by contacting your state assembly member and asking them to vote Yes on SB 443.

With police putting extreme pressure on legislators to vote against SB 443, the vote is expected to be close, so your assembly member’s vote can make the difference. If you are concerned with the 4th amendment right for American citizens “to be secure in their persons, houses, papers, and effects, against unreasonable searches and seizures” then send your assembly member a message to support SB 443 – just CLICK HERE.

There’s was a great oped in the OC Register about SB 443 – to read it and learn more CLICK HERE and then if you still haven't sent a message to your state assembly member to Vote YES on SB 443 - do it right now by CLICKING HERE. 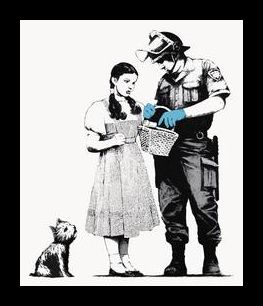 Using an Illegal Search Against You

SB443 is a major step in the right direction, unfortunately this week the U.S. Supreme Court took a big step in wrong direction.

In a 5 – 3 decision, the court ruled that a police officer’s illegal stop and search of a man on the street did not prevent evidence obtained from the illegal search to be used against him.

Writing for the court’s majority, Justice Clarence Thomas wrote that the stop was a result of a “good-faith mistake” and that the illegal stop was, at worst an “isolated instance of negligence.” Try using that in court as argument why you shouldn’t be convicted of drunk driving because you made “a good-faith mistake” and that the incidence was just an “isolated instance of negligence.”

Dissenting Justice Sonia Sotomayor took strong exception to that reasoning writing that this case allows police to stop you on the street, demand your identification, and check it for outstanding traffic warrants even if you are doing nothing wrong.

The dire constitutional consequences of this decision is succinctly summarized in Justice Sotomayor’s own words.

“By legitimizing the conduct that produces this double consciousness, this case tells everyone, white and black, guilty and innocent, that an officer can verify your legal status at any time. It says that your body is subject to invasion while courts excuse the violation of your rights. It implies that you are not a citizen of a democracy but the subject of a carceral state, just waiting to be cataloged. 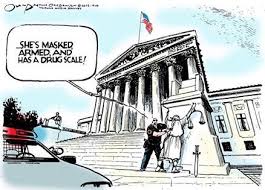 We must not pretend that the countless people who are routinely targeted by police are isolated. They are the canaries in the coal mine whose deaths, civil and literal, warn us that no one can breathe in this atmosphere. They are the ones who recognize that unlawful police stops corrode all our civil liberties and threaten all our lives. Until their voices matter too, our justice system will continue to be anything but.”

Do You Enjoy Our Newsletter?
Do You Like Our MJ Advocacy?
Your Support Would be Appreciated!
Join our 420 Club
It's only 14 cents per day
CLICK HERE TO JOIN