Why is Obama Moving to California?

GOLF, SUN AND A-LIST CELEBRITIES
ARE NOT THE ONLY REASONS THE
OBAMA’S ARE MOVING TO CALIFORNIA

After eight years residing in the White House, President Obama needs to find a new home. Although there has been no confirmations by the White House, it has been reported in numerous news outlets that he and Michelle will be moving to California and the affluent Coachella Valley community of Rancho Mirage. Located near Palm Springs, the town’s major industry is the 5-star Eisenhower hospital/medical center providing health care services to wealthy retirees.

With the Chicago Sun-Times revealing that Michelle Obama loves California and was interested in finding a home in Palm Springs, USA Today reported that “Home-buying rumors took off in the summer of 2014, when the president and Michelle Obama spent a June weekend in Thunderbird Heights” – the exclusive gated community where former President Gerald Ford lived for two years before moving to another Rancho Mirage estate.

The area’s local daily newspaper, the Desert Sun, has been covering the Obama’s potential move for over a year reporting in September that Michelle Obama's plane was at the Palm Springs International Airport. Confirming the newspaper’s reporting, the New York Post informed its readers that the President has purchased a multi-million dollar home in this affluent resort town, but will continue to reside in Washington DC until Sasha, their youngest daughter, graduates from high school.

The home the Obama’s are presumably purchasing is rumored to be the 8,200-square-foot former home of novelist Joseph Wambaugh. On the market for about a year, the Desert Sun reported that the gossip amongst local real estate agents was that the President was looking to buy the home with Richard Johnson of the New York Post’s Page 6, reporting that “the Obamas were in escrow to buy a $4.25 million home in the community.”

The home is very close to the residence of the Oval Office's interior designer Michael S. Smith, whose partner James Costos is the current ambassador to Spain and Andorra. The Obama’s have visited and occupied as guests Smith’s home on the occasion of some of their multiple visits to Palm Springs. Smith will most likely be involved in decorating their new home wherever it is.

Recognized for its world-class golf courses and resorts, Rancho Mirage is an upscale community known for attracting the wealthy, famous and politically connected. From being an avid golfer to his wife wanting to live in California, Rancho Mirage seems to be an ideal location for his post-Presidential life. However there could be another reason for Obama’s move to California that has so far escaped the media and the gossip columnists peering eyes.

While in high school and college, our distinguished President was an avid cannabis consumer. In Barack Obama: The Story, biographer David Maraniss reported Obama and his friends formed The Choom Gang - slang for marijuana smoking – and that he was known as “the Interceptor” as when coming upon a group of tokers “he often elbowed his way in, out of turn, shouted "intercepted", and took an extra hit.”

Although Obama gave up smoking marijuana some time ago (exactly how long ago is questionable) anyone who relished smoking marijuana as much as he did, has fond memories and recollections of the enjoyable experiences it brought. In his book Dreams of My Father, Obama wrote as a high school kid, he would smoke "in a white classmate's sparkling new van," he would smoke "in the dorm room of some brother" and he would smoke "on the beach with a couple of Hawaiian kids." Sounds like he was a knowledgeable and proficient smoker who got off on smoking a lot of pot - an experience he savored and repeatedly enjoyed.

Although Rancho Mirage, has banned storefront dispensaries, the town does allow delivery services so the President would have easy access to marijuana – he just needs to check out the local Craigslist listings. I am sure the new house has a large backyard where the President could erect a secure greenhouse and cultivate six plants. I am also quite confident that he would have no problem obtaining a doctor’s recommendation so he could grow more than six plants if his consumption began to approach what he consumed in his youth.

I am sure there are many cultivators of extraordinary cannabis that would be honored to be able to provide the President with as much marijuana as he would desire to consume. With Trump and the Republican congress undoing his legacy achievements of Obamacare, immigration executive orders and climate change treaties as well as revoking his birth certificate, marijuana would be of immense benefit.

DECEMBER MAPP MEETINGS AND
FAREWELL TO THE THCF CLINIC PARTY 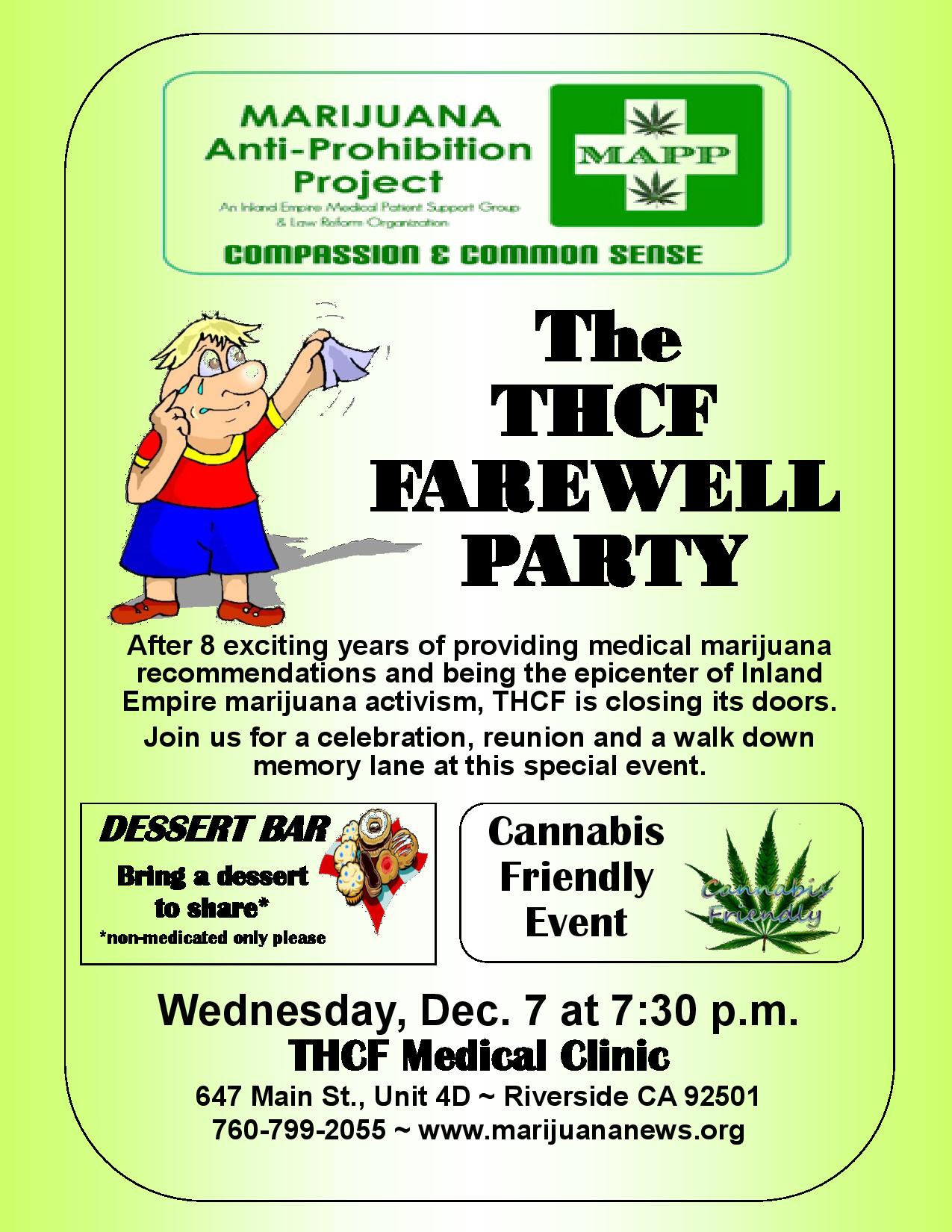 Prop. 64 and the results of the 2016 elections and how they will impact on marijuana consumers will be the topic of the MAPP meetings in Palm Springs and Joshua Tree. The Riverside MAPP meeting will forgo much discussion on that subject and will have a memorable THCF FAREWELL PARTY

JOIN IN ON #GIVINGTUESDAY WITH MAPP

MAPP is the oldest and most active marijuana law reform organization based in the Inland Empire that works throughout the state of California with coalition partners throughout the U.S.A.

Your support in the past has been key to our ability to provide services, information and representation with local, state and national officials. With the passage of Prop. 64 and the other legalization measures throughout the country, now is the time that your support is needed more than ever. There are very powerful forces aligning to knock down the advances that have been made and we need to fight them on every public and private level.

In support of #GivingTuesday we are not asking for much - just 14¢ per day to MAPP by joining our 420 Club and committing to donating $4.20 a month to help fund MAPP’s programs and outreach to the community. It’s simple and easy to do – just CLICK HERE.

If you are just not willing to make a monthly commitment at this time, consider making a one-time donation by CLICKING HERE.