Canada to Shake Up

From April ­­­­­19 - 21, the long awaited and much anticipated UN General Assembly’s Special Session on Drugs will take place at the UN Headquarters in New York.

where drug policy reform was a major topic of debate for the first time in the Summit’s history. The following year in May 2013, the Organization of American States (OAS) issued a report, undertaken at the direction of a number of Central and South American leaders, supporting legalization as a viable alternative to the continued prohibition of drugs.

Thus began the process which eventually resulted in the upcoming 2016 UN General Assembly Special Session (UNGASS) on Drugs. This is unprecedented and has caught world-wide law enforcement off-guard - almost all of whom ravenously feed every year at the $100 billion+ pig trough of drug prohibition. Needless to say they are scrambling to regain an upper hand.

Drug law reformers, such as those who prevailed on OAS to bring this UN Special Session about, are looking to use this Special Session to develop a new direction using harm reduction protocols and

doctors, nurses and social workers for dealing with drugs rather than the criminal justice system with their cops, attorneys and prison guards.

This is in stark contrast to the last UNGASS meeting in 1998 where law enforcement was totally in control with self-serving calls for a “drug-free world” and concocted absurd and impractical goals to reduce drug production and use.

One of the major policy initiatives in the harm reduction direction was released on September 9, 2014, when the Global Commission on Drug Policy (GCDP)

released their groundbreaking report, Taking Control: Pathways to Drug Policies that Work. The report calls for decriminalization, incarceration alternatives, increased emphasis on public health approaches and for permitting the legal regulation of drugs by nations that want to enact such policies.

The Commission is the most distinguished group of high-level leaders to ever call for such sweeping changes and includes former Brazilian President Fernando Henrique Cardoso, former Mexican President Ernesto Zedillo, former Colombian President César Gaviria, former Swiss President Ruth Dreifuss, and Richard Branson, among others. It is the intention of drug law reforms to get the UNGASS meetierng to use the Global Commission’s report as a template for drug policy reform.

Now just one month before this earthquake of a UN conference begins, Canada has dropped a bombshell – one that apparently was welcomed with open arms.

At the Commission on Narcotic Drugs meeting in Vienna in March 2016, Hilary Geller, Assistant Deputy Minister of Health 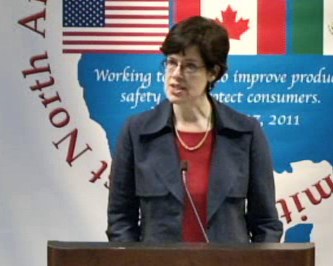 , stated that the new Canadian Liberal Government headed by Justin Trudeau will be moving away from the American War on Drugs policies, open more safe-injection sites for drug users, promote harm reduction policies and legalize marijuana.

Rather than jaws dropping to the floor and stunned into silence, the National Post of Canada reported that attendees at the conference, made up of government and non-governmental organization officials from around the world, “erupted in applause” mid-way through the address and gave a prolonged ovation.

Jason Nickerson, a research scientist attending the conference from Ottawa’s Bruyère Research Institute, told Post reporters that Geller’s presentation was at odds with the policies of the former Canadian government of Stephen Harper whose policies closely followed those of the United States implementing mandatory-minimum jail sentences and beefing up police narcotics enforcement. Harper’s Conservative Party government also opposed harm reduction programs which focus on prevention rather than prosecution and refused to condemn the death penalty for drug offences, imposed by countries such as Iran and Indonesia.

At the conference Geller emphasized that her government opposes capital punishment “in all cases.”

said that Geller’s stance is a “180-degree” turnabout and that “It was very moving for the Canadians in the room, people who have been working on this issue for 10 years in a context where Canada has been more aligned with China and Russia and Pakistan.”

As Nickerson, who supports more liberal policies, pointed out “There are some countries here that are coming out and saying important, progressive things, but it’s certainly not as explicit as what Canada is saying.”

Will this conference result in the repeal of Henry Anslinger’s pet UN Single Convention on Narcotic Drugs Treaty that has impaled humane and rational reform on the altar of Drug Prohibition? Probably not as the day before the conference where Ms. Geller made her presentation, a UN official had rebuked Canada for its moves to legalize marijuana, which it said violated the Single Convention on Narcotic Drugs.

It is a start nevertheless and maybe, just maybe, there can be as much significant movement forward as there was at the recently concluded climate change conference in Paris. We can only hope that President Obama gets his mojo back on drug reform from when he was a U.S. Senator.

Obama needs to direct the U.S. Delegation to support the OAS and Canadian governments bid to end the criminalization of drug use by instituting harm reductions policies that can successfully reduce substance abuse while protecting civil rights, clipping the omnipotent wings of law enforcement, saving billions and billions of taxpayer dollars and bringing to an end the racist, inhumane and failed policies of the War on Drugs.

Positive Protection Public Policy is the template for Richard Gicomeng’s approach to drug policy reform where all laws in our society would be designed to protect the public rather than entrap innocent people and hold them accountable for ridiculous archaic restrictions that only weaken the American public. Richard points out that it was not the Marijuana Tax Act of 1937 that reduced drug abuse, it was the education servicemen received during WWII on how to use drugs the right way for the right medical purpose that turned the 1940s and 1950s into the two decades of the 20th century when narcotics use was at its lowest.

Jason Elasser, one of the principle organizers of Yucca Valley’s Measure X initiative, has received one of the commercial

cultivation licenses from Dessert Hot Springs for operating a large scale marijuana growing facility in their industrial warehouse district. He is currently working with the city of Desert Hot Springs to host a Town Hall meeting on April 20 to inform and educate the residents of Desert Hot Spring about the importance and positive impacts that marijuana will play in the transformation of that city. Jason will be speaking about what is happening in DHS, what he is specifically licensed for and will be doing as well providing information on the upcoming DHS Town Hall meeting that everyone, whether they live in DHS or not, are invited to attend.

Native-Americans providing mmj to patients and candy thieving cops in a mmj dispensary will be the focus of the presentation by Marla and David James. The activist couple have been working with a Native-American tribe to solve the distribution problems that have plagued medical marijuana patients. They were also caught up in a malicious raid on a mmj collective in Santa Ana where the cops were caught feasting on presumably mj edibles. The cops have now been indicted for stealing candy bars. Watch for the next newsletter where more information on their presentation, including a special speaker, will be presented.

An assortment of delectable cookies and milk will be served at all 3 meetings.